There is an old curse, allegedly Chinese but more likely English, “May you live in interesting times.” From a macroeconomist’s perspective, the periods around the financial crisis and now Covid and its fallout constitute the most interesting times in many people’s lifetimes. Is inflation going to be with us for a prolonged period of time? Are we in a recession or moving towards a recession? Have fiscal and monetary policies contributed to the problems or served to mitigate the problems? Compounding the confusion, the press – including the financial press – has too often adopted “the sky is falling” approach to address the issues.

The short summary: economic data indicates extremely interesting times given that economic indicators are giving incredibly mixed signals, but there is no signal that the sky is falling. Perhaps the key to understanding current economic events is “nuance” and a careful examination of macro data.

First, are we in a recession? The standard rule of thumb used to define a recession is two quarters in a row of negative growth. Aren’t we there since the preliminary estimate of second-quarter real GDP growth was -0.2% following a -0.4% rate in the first quarter? The preliminary numbers, however, are subject to potentially substantial revisions as additional data becomes available, and the initial estimate could easily turn positive with that data. The first quarter’s initial estimate of -1.4% was revised upward to -0.4%.

More importantly, it is a committee of the National Bureau of Economic Research (NBER) that dates recessions, and GDP is not generally considered one of their primary measures of interest when determining a recession. Why not? Because the NBER dates recessions by month rather than by quarter and GDP is only reported quarterly. The NBER can consider any series it desires as a potential recession indicator. Series like personal income excluding transfers, nonfarm employment, retail sales, and the Federal Reserve’s index of industrial production have all been considered important variables. In addition, the NBER is under no pressure to “call” a recession ASAP. Their goal is to get the date correct rather than make a quick call. The NBER did not call the start of the Great Recession until late 2008 then determined that the recession began in December 2007, almost a year earlier. Based on that call and the underlying data, it appears that unemployment was likely the most important factor underlying that decision.

The implications for whether we are in a recession today are clear. To understand the state of the economy it is critical to go beyond GDP. The following two charts, one looking at the labor market and the other looking at production and retail sales, present far from a full picture, but they give a better perspective on the types of factors appropriately considered when determining the state of the business cycle.

Chart 1 presents both the unemployment rate (UR) and the annual percentage growth rate in employment. The data suggests that we are neither in a recession nor likely heading into a recession. The unemployment rate has been steady at its lowest recent level, 3.5%, the same as its pre-pandemic level. Employment growth remains strong with a year-over-year growth rate of over 4%. The labor force participation rate, not presented, is down but that is due to a decrease in participation of the over 55 age group. Neither series suggests a recession is near. 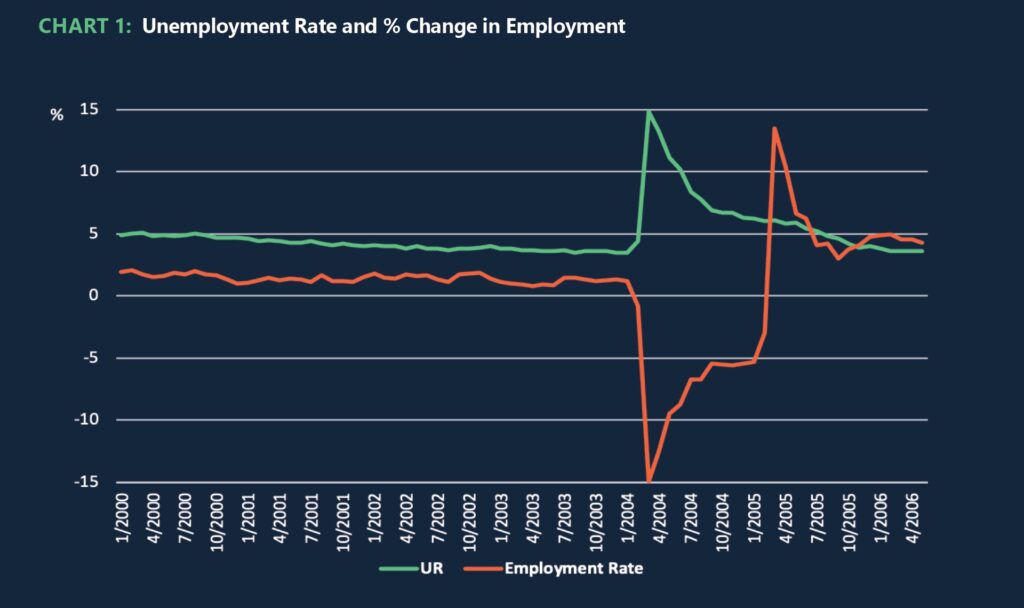 Chart 2 presents the annual percentage changes in industrial production and retail sales. Retail sales growth has dropped dramatically from about 15% down to about 7%. However, the higher growth rate was clearly unsustainable – and the prior positive spike is a statistical anomaly arising from the drop in the numbers caused by Covid. Were retail sales continue to decline, that would suggest a potential recession, but there is little evidence that will occur, and 7% remains very strong growth. Industrial production took a relatively long time to recover from Covid, but recent growth also has been strong. There is some indication that growth there also is slowing. But even June’s 4% growth exceeds the highest growth rate from 2016 through 2018 of just under 3%. Slowing growth is a potential concern but the question again arises whether a 4% growth rate in industrial production is sustainable in the long run. 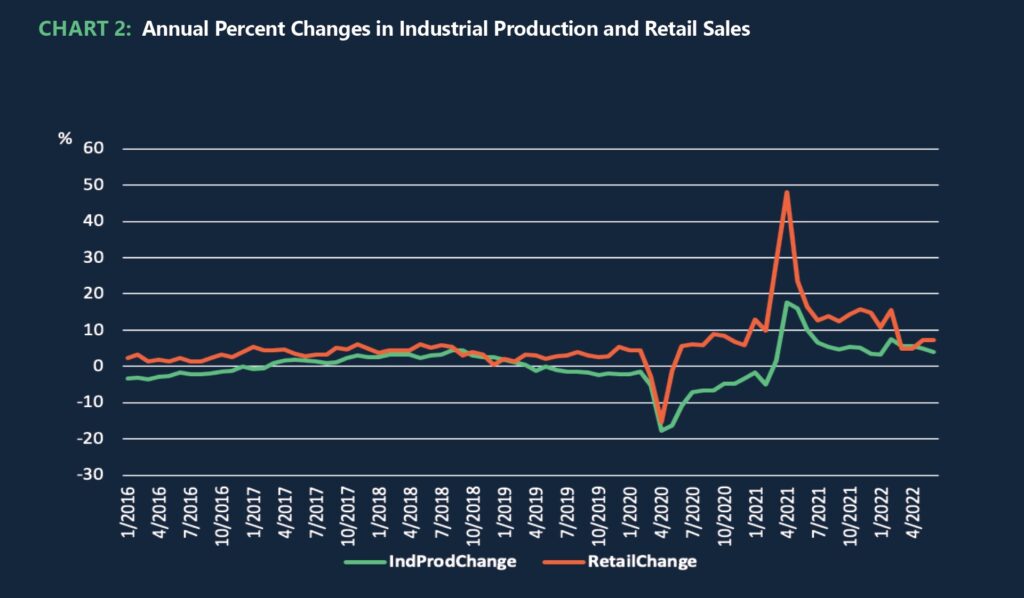 The bottom line from these indicators is that the current evidence supporting either the view that we are currently in a recession or that we are heading into a recession is remarkably limited given how much discussion the topic has received. Should there be concerns? Definitely. While the U.S. economy appears to be in relatively good shape, the same cannot be said for Europe or China. The former’s problems appear due primarily to energy concerns arising from the Ukraine-Russia war, and the latter’s slower growth arises primarily from China’s continuing shutdowns due to Covid. Even in the U.S., there are indicators that suggest weakness, e.g., the University of Michigan’s index of Consumer Sentiment is lower now than it was during the Covid shutdowns. In sum, however, the U.S. economy is in much better shape than most other economies and appears better able to weather any coming economic storms.

Turning to inflation, Charts 3 and 4 present the data on multiple inflation measures. The headline inflation rate is the Consumer Price Index (CPI), in part because it is used as the index to adjust Social Security benefits. In Chart 3 CPI shows the most aggressive increase of any of the measures. This increase is largely due to dramatically higher oil prices and thus higher prices of any oil derivatives, primarily gasoline and any product with substantial transportation costs. As the price of gasoline has come down, we see the hint that inflation has likely peaked and is likely on the way down. It is important, however, not to look solely at the overall CPI but to consider the Personal Consumption Expenditures (PCE) and to exclude the price movements stemming from the idiosyncrasies of oil prices, i.e., focus on core inflation. Chart 4 presents four measures of inflation, CPI and PCE, and both standard and core inflation rates. Also included is an indicator of inflation expectations, the spread between the nominal and real 5-year Treasury bond, referred to as the breakeven rate of inflation. 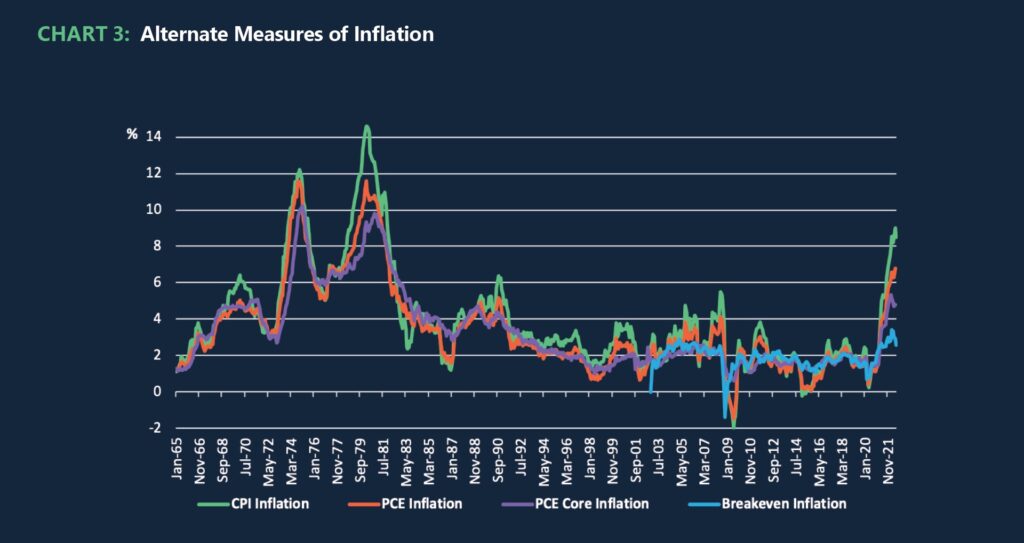 Through early 2021, all four measures of actual inflation indicated about a 2% rate of price increase, and then all four direct measures indicated a substantial increase in inflation, probably because vaccines became widely available then and aggregate demand increased as the economy opened up, consistent with the increase in Retail Sales presented in Chart 2. A substantial gap opened up between CPI and PCE at this time. We can debate which measure of inflation is best, with the Federal Reserve choosing PCE as its preferred measure. But there should be little debate that we did have an acceleration of inflation and that accelerating inflation appears to be over. The increase in inflation and now the decrease in inflation should not be a surprise and correlates closely with macro variables like Retail Sales.

Frankly, I was surprised at how aggressively prices increased with the surge in sales. But given the return of the economy to more normal values for series like retail sales and overall consumption, I believe that the surge in inflation will be only temporary. While I would like to say that price increases would quickly return to their prior 2% level, the data suggests that result is unlikely. Based on the breakeven inflation rate, which is predicated on market expectations of inflation, the best forecast for inflation 5 years down the road is close to 2%. That decline, however, likely will be slower than we might wish.

Can we identify a culprit for the increased inflation? Too much expansionary monetary policy and too much expansionary fiscal policy have been fingered as responsible. The data, however, rejects both contentions. The timing for expansionary policies does not match the increases in inflation. Monetary policy has not been expansionary since November 2021 with the monetary base (MB) shrinking by about $400 billion since then as indicated in Chart 5. The Fed’s recent rate increases have garnered more headlines in terms of policy actions, but the reduction in the MB likely has had more impact in slowing inflation – and likely also will have more impact on the overall level of deposits. The reduction in MB is a move directly out of Milton Friedman’s handbook on how to reduce inflation. 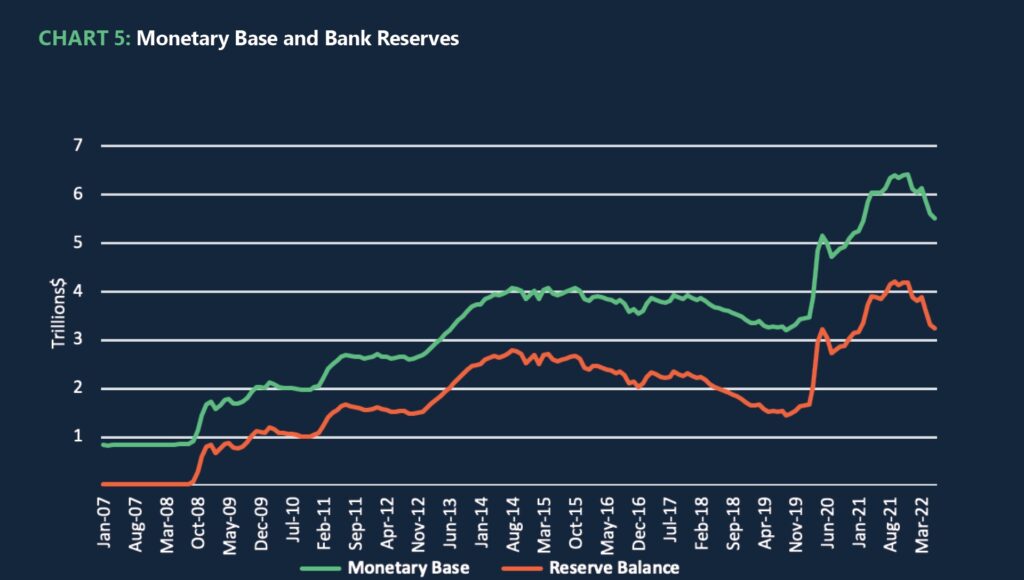 There is a concern in some quarters that the dramatic rate increases will slow the economy so significantly that we will not have a soft landing and will have a recession. That result appears unlikely. The Fed has increased the federal funds rate by 2% in a very dramatic fashion. That increase has been reflected in short-term rates, but it has not been reflected in long-term rates. Since April 2022, the funds’ rate increased by 200 bps, but the 10-year Treasury rate declined by 22 bps. That has led to a dramatic flattening of the yield curve. The 1-year Treasury rate is now above the 10-year, 2.98 vs. 2.67 for July. An inverted yield curve is sometimes taken as a leading indicator of a recession. In this case, that appears to be a misreading of the data. For reasons stated above, the increase in short-term rates is likely more a signal of the Fed’s seriousness in dealing with inflation than with the actual conduct of monetary policy as better captured by changes in the monetary base.

Where do we stand and where are we going? Summarizing the current situation:

Looking ahead in the short-term on the macro front:

The macro implications for deposit growth and deposit rates are straightforward: