For example, consider two potentially diametrically opposite institutional strategies, one focusing on attracting and retaining deposits by emphasizing competitive rates but not spending much on services while the other focuses on providing superb service but keeps rates relatively low.  With an increase in market rates, one would expect the former institution to increase deposit rates apace with its historical trends.  Were it not to do so, it should expect to see a potentially substantial reduction in deposit balances.  Simply stated, it has attracted a customer base that values interest rate returns over a high service level.  Changing its behavior and not maintaining relatively high rates of return would likely result in an outflow of funds to other financial institutions that are following a similar strategy and do increase rates.  In contrast, the institution focusing on service would likely be less inclined to raise rates since their customers have made the decision that better service is preferred to marginally higher deposit rates.

Clearly, a financial institution can establish account types that follow a mix of strategies, some that focus on rates and others that focus on services.  In general, however, for any type of deposit account, there is a relatively fixed amount of costs that an institution is willing and able to bear and spending more on services means spending less on rates and vice versa.

The sensitivity of deposits to rate changes depends critically on a financial institution’s historical choices of rates and services.  But it also depends on how depositors use and think about a particular account or account type.  As market rates begin to increase, consider how different deposit categories could change.  Higher rates could lead depositors with checking accounts that pay no interest (DDA) to switch holdings into interest bearing checking accounts (NOW) or even some form of savings accounts (Sav or MMDA).  By itself, that could lead  NOW or MMDA deposits to increase while DDA’s decrease.  But NOW’s could decrease if you have further switching into MMDA’s or even CD’s to chase higher rates.  In contrast, if people expect rates to continue to increase, then CDs might become less attractive and DDA’s more attractive, offering depositors the option of waiting to move back to higher-rate CDs at some future point.  The more an institution’s depositors are rate-focused, the greater the potential movements, but all institutions will have depositors that will be facing the same decisions.

It is tempting to argue that rate increases will generally lead to bank deposit decreases, and that is conventional wisdom.  However, the view is not supported by the underlying data.  Two points are key.  First, there are sound theoretical reasons why deposits could increase rather than decrease when rates increase.  And second, different types of deposits at different financial institutions may behave very differently, in part due to different institutional strategies and in part due to different depositor bases.

To demonstrate this point, we have included charts for three different institutions that examine the behavior of a couple of types of their deposits.  Specifically, looking at the forecasts of retained balances of checking and savings deposits for a small bank (A), a medium-size credit union (B), and a large bank (C).  T focus is on retained balances rather than total balances.  When valuing an institution, it is critical to consider the institution’s ability to retain balances.  The forecasts employed here are generated by MountainView’s Advanced Assessment Methodology (AAM) which is described in detail in my paper “Valuing Core Deposits” in the Journal of Financial Services Research, 2013, p. 197-220.  Each chart presents the forecasted time path of checking and savings deposits for the next twenty years based on that institution’s historical data and regression analysis of that data and the rate sensitivity of that institution’s deposits.  In this analysis, it is critical that institution-specific data is employed because the results will be specific to that institution and its depositor base.  Alternately stated, there is no “one-size-fits-all” answer for how deposits respond to rate changes.

The first institution is a small bank that has relatively low retention rates.  The baseline forecasts for NOW accounts indicates the institution should expect only about 35 percent of its NOW deposits will be retained after five years while less than 30 percent of its MMDA deposits will be retained five years out.  We must emphasize that all retention rates refer to deposit balances rather than the number of accounts.  Typically, smaller accounts are more likely to close than larger and looking at the number of accounts rather than account balances will likely yield a very misleading picture of the value of deposits.  The dashed lines in the chart indicate the impact of a 100 bps increase on rates on each type of deposit.  For this institution, the response of deposits is consistent with conventional wisdom.  A 100 bps increase decreases the retention of NOW balances by about 15 percent and MMDA balances by about 10 percent. 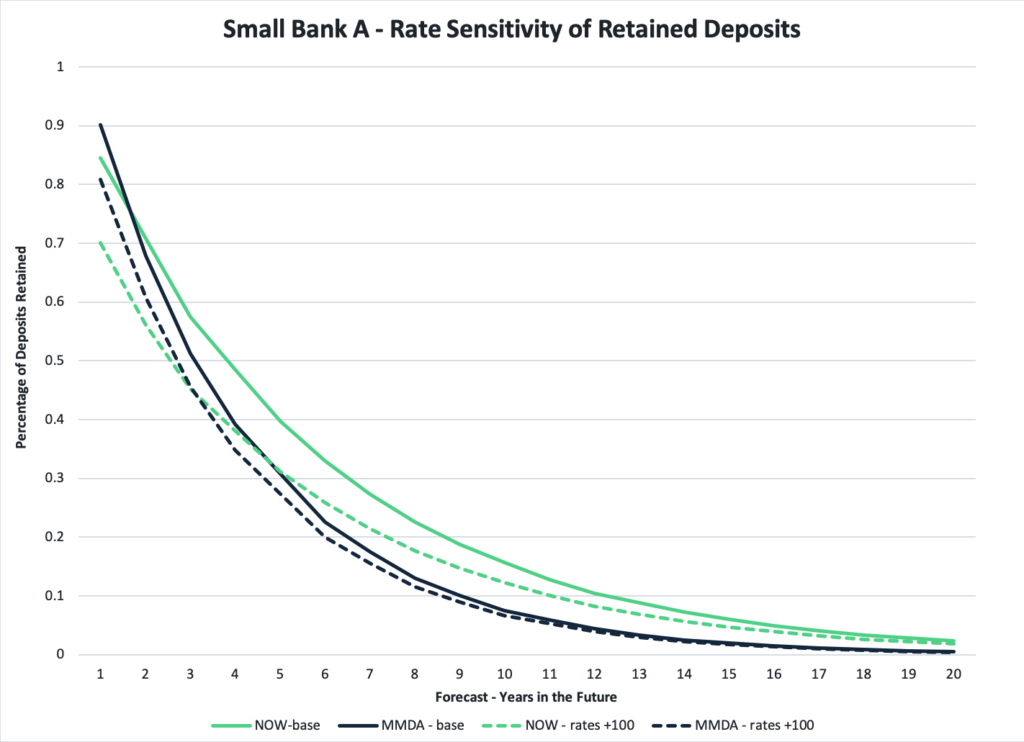 The second institution is a credit union and the results differ dramatically.  First, the retention of interest bearing checking deposits is about 100 percent throughout while the base retention of MMDA’s is about 40 percent, slightly higher than that for the small bank.  The behavior with a change in rates, however, differs substantially.  MMDA retention again drops by about 10 percent, but interest-bearing checking retained balances increase slightly. 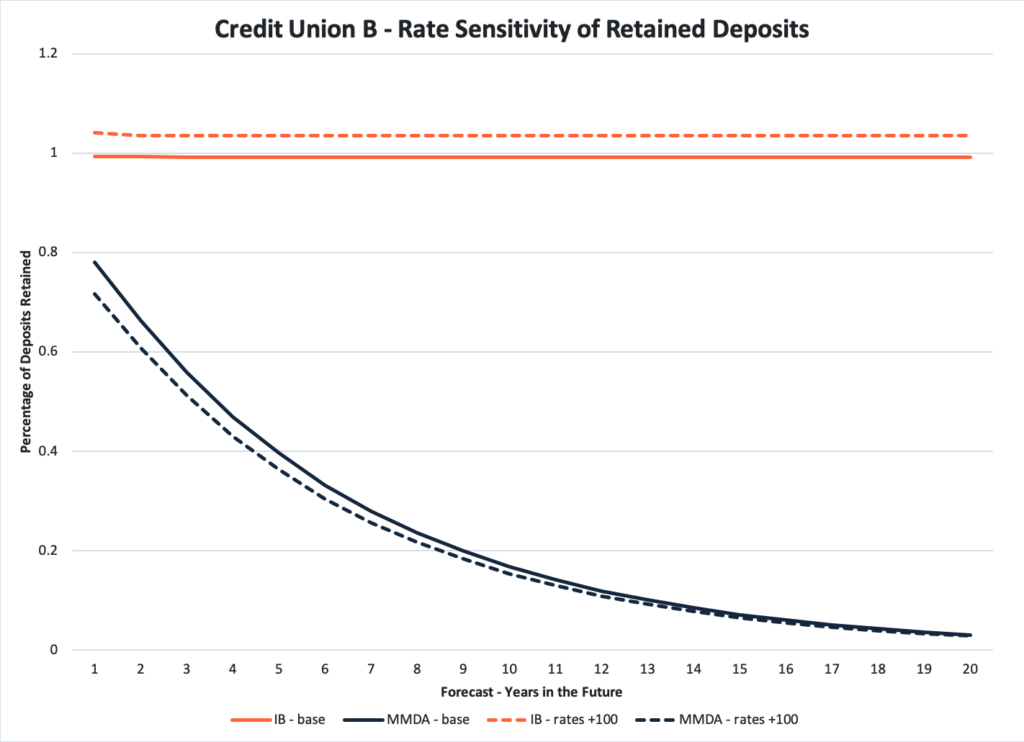 For the large bank, there are three sets of curves presented, one for NOW deposits and two for different types of savings deposits.  As with the small credit union, there is a small increase in deposit balances with a rate increase.  The two savings categories are included to demonstrate that there may be substantial differences not only between institutions but also within a single institution.  In this case, one type of savings deposit shows virtually no impact of a 100 bps rate increase while the other has about a 5 percent increase in balances after the 100 bps rate increase.  That difference in interest rate response is potentially important for the bank for two reasons.  First, it shows that depositors have been stratified into different behaviors in their response to rate changes.  And second, it suggests the first category of savings may be worth more to the institution than the second.  In part, this result follows because it has a longer life, but also because with a rate increase and likely loan prepayments reduced, that reduction in prepayments could be offset by the increase in retained savings balances. 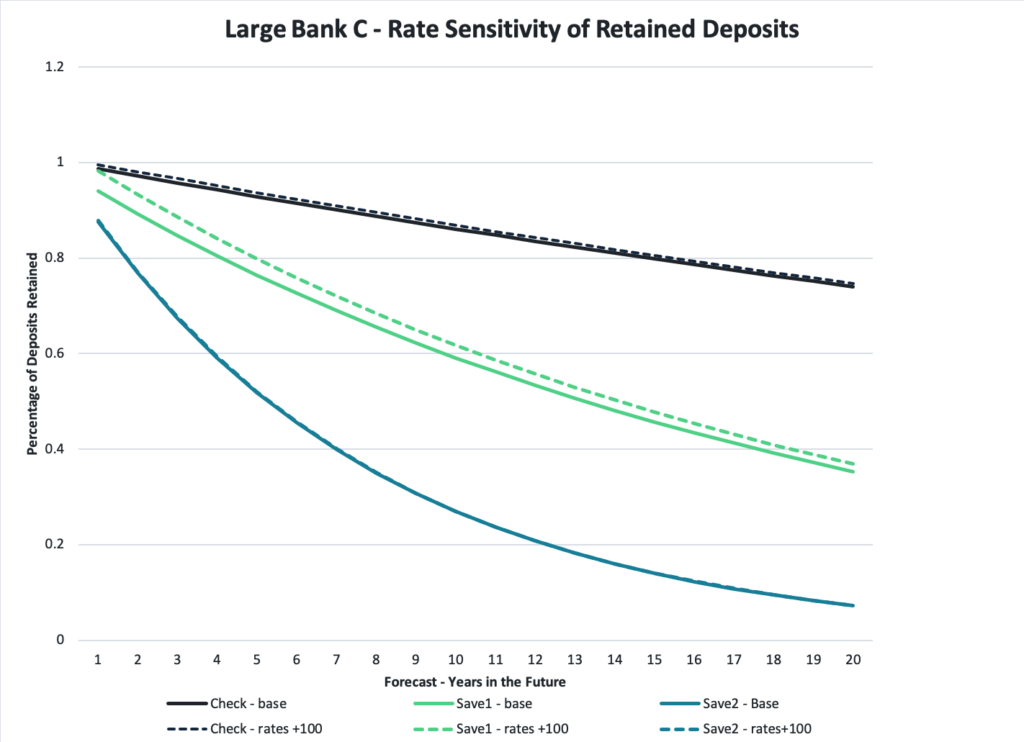 Bottom line? An institution’s knowledge of how its retained balances change over time and how sensitive those balances are to rate changes is critical to maximizing the bottom line. Be sure to visit our solutions page to learn more about how we can help with your deposit analysis today!

At MVRA his responsibility is to ensure that the analytical background of every deposit and loan study follows best practices both in terms of statistical analysis and economic theory. He also works in model validation services analyzing financial and statistical models for financial risk.